Connect and share knowledge within a single location that is structured and easy to search.

What is the maximum limit for number of moderators to our main site?

Is there any limit on the maximum number of moderators for our main site?

There's no official limit. StackOverflow has the most, with 24, but sites the size of AI.SE typically have 3-4 (though AI.SE has had more simultaneously in the past).

StackOverflow currently has 24 ♦moderators but they also get 10 million visits/day and 5.7k questions/day right now.

Here's the sites that have approximately the same number of questions/day as Artificial Intelligence SE: 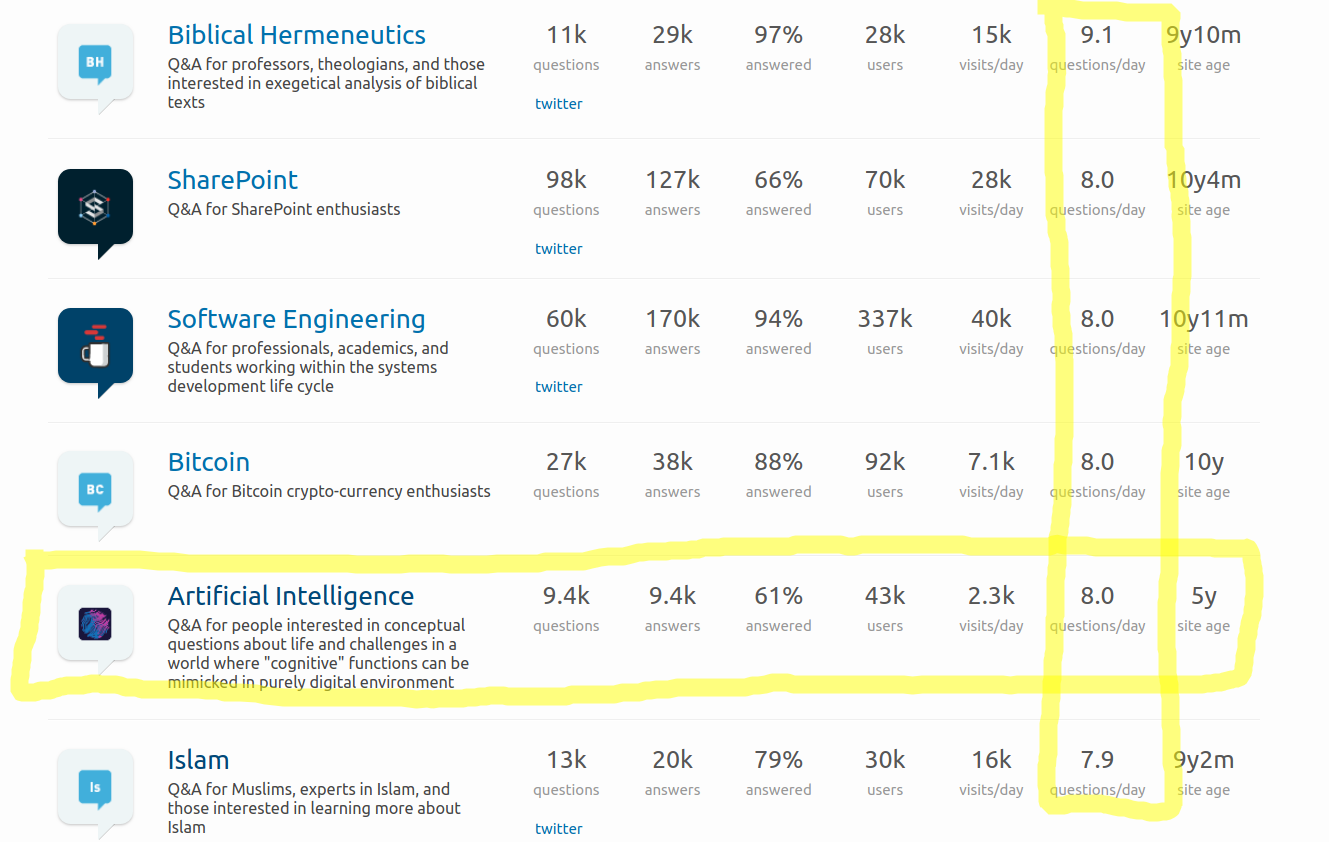 However, Artificial Intelligence did have more simultaneous ♦mods in the past, and this can often happen if for example the current ♦team requests for it due to too much workload or whatever reason they feel appropriate.

Very few sites have only 2 ♦mods:

But this year a plethora of sites had fewer than 3 ♦mods and gradually elections have been taking place to fill up those spots, so these sites might be next.

Finally I will note that:

I pushed hard to increase to 4, and wanted 5, because we were getting crushed at one point, and one of our current mods was taking the brunt.

Things seem to have normalized, such that, unless my fellow mods are calling for expansion, I'm ok with the present condition.

I personally haven't had much time in the last couple of years, but I was also burned out from carrying the entire burden in the transition period before we got our new mods, who are have been instrumental in re-purposing toward the current, much more focused, stack.

I think just the current structure and scope will allow us to continue to grow and improve, but it's a long term project of years and decades.

If we start getting blitzed again, we can definitely hold a new election, but it's sort of a hassle, and it's not clear how many users want to carry that burden. It takes a lot of commitment, and many of our best users are, quite frankly, much more valuable to the stack not having to deal with the BS mods sometimes have to deal with.

Not the answer you're looking for? Browse other questions tagged discussion moderators .

Welcome!
This site is for discussion about Artificial Intelligence Stack Exchange. You must have an account there to participate.
Help
Visit chat

8
How can you help our site and community?
1
Is survey type questions allowed in the main site?
2
What textbooks have you read?
7
Why domain experts of our main site are mostly calm?
4
What can I do to attract expert users?
0
Are survey type questions related to implementation allowed?
5
Can our main site deal with etymological aspects of artificial intelligence?
2
What is stopping us from expanding our scope strategically?
2
Are you interested in moderating Artificial Intelligence Stack exchange?